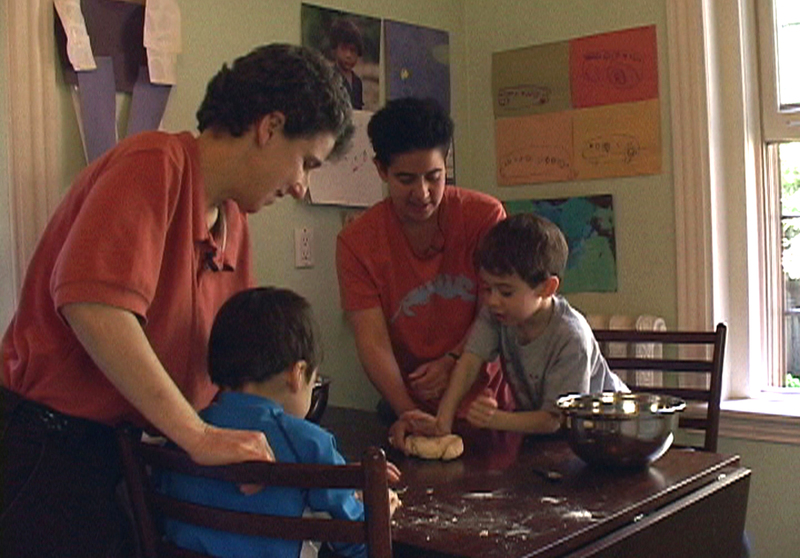 At the beginning of the 1990s, lesbians and gays had little recognition of their relationships in law. While most provinces had passed protection from discrimination in provincial human rights legislation, the Canadian government still had not included non-discrimination based on sexual orientation in the federal Human Rights Act. The government found itself caught between the growing equality claims of lesbians and gays and opposition from conservative forces, who argued that lesbian and gay equality would undermine the traditional family. The 1990s would prove to be a turning point. By the end of the decade, lesbians and gays had won relationship recognition and adoption rights in most jurisdictions in Canada. Interviews cover a range of struggles, including the fight for same-sex relationships recognition and the Campaign for Equal Families in Ontario (1994); the battle over the banning of three children’s books which depicted same-sex parents by the Surrey School Board in B.C. (1997); to same-sex pensions and the growth of Charter rights cases during an amazing decade in the struggle for lesbian and gay equality in Canada.

Following the inclusion of 'sexual orientation' as a prohibited ground of discrimination in the Ontario Human Rights Code, in 1986, the Coalition for Lesbian and Gay Rights in Ontario (CLGRO) held a series of community meetings to debate what issues the coalition would focus on next. One concern was relationship recognition for same-sex couples. In 1988 CLGRO set up a working group to examine Ontario laws affecting 'spousal status' or relationship recognition in common law. In 1993, CLGRO created a series of public service announcements to raise awareness. Despite their efforts, no broadcaster at the time would agree to televise the PSAs.

Coalition for Lesbian and Gay Rights in Ontario (CLGRO) PSA "To Have and To Hold", 1993

Coalition for Lesbian and Gay Rights in Ontario (CLGRO) PSA "To Have and To Hold", (1993) (video link) features a mother-to-be discussing her and her partner's journey to parenthood.

Coalition for Lesbian and Gay Rights in Ontario (CLGRO) PSA "To Love and To Cherish", 1993

Coalition for Lesbian and Gay Rights in Ontario (CLGRO) PSA "To Love and To Cherish", (1993) (video link) features two loving same-sex couples discussing how they met.

Coalition for Lesbian and Gay Rights in Ontario (CLGRO) PSA "In Sickness and in Health", 1993

Coalition for Lesbian and Gay Rights in Ontario (CLGRO) PSA "In Sickness and in Health", (1993) (video link) examines the result of denying same-sex couples relationship recognition and rights when one partner is ill.

With the election of the NDP in 1990, activists seized the opportunity to press for same-sex relationship recognition in Ontario. In the spring of 1994 the NDP introduced Bill 167, which would have changed the definition of spouse in Ontario law to include same-sex couples. It was the first attempt to pass such legislation in Canada. The Coalition for Lesbian and Gay Rights in Ontario set up the Campaign for Equal Families to fight for passage of the bill.

Taking place shortly after the defeat of Bill 167, the Pride Day march in 1994 was the largest LGBT political action at the time in Canada. The march included 50,000 people. Floats and protest banners are featured, along with an effigy of Ontario Liberal party leader Lynn McLeod, who withdrew her support for Bill 167. Clip includes footage at the Ontario Legislative Assembly at 11 Wellesley St W., where marchers held a pink ribbon and formed a human chain around the building. Film by Nancy Nicol.

Susan Ursal, Bill 167 and the Campaign for Equal Families

Lawyer, Susan Ursal, a leader in the Foundation for Equal Families, gives an account of the history of Bill 167, An Act to Amend Ontario Statutes to Provide for the Equal Treatment of Persons in Spousal Relationships, in the Ontario legislature in 1994 and the Campaign for Equal Families.

Lawyer, Michael Davenport, discusses Bill 167, the Act to Amend Ontario Statutes to Provide for the Equal Treatment of Persons in Spousal Relationships in Ontario. Michael researched and co-authored “Happy Families, The Recognition of Same-Sex Spousal Relationships”, written by the Coalition for Lesbian and Gay Rights in Ontario in April 1992 and presented to the Ontario legislature. The report was first study of how spousal status in Ontario affected gays and lesbians, and recommended that the government change the definition of ‘spouse’ to include same-sex partners.

Chris Higgens and Chris Phibbs, members of the Campaign for Equal Families talk about the Campaign for Equal Families and Bill 167 An Act to Amend Ontario Statutes to Provide for the Equal Treatment of Persons in Spousal Relationships in Ontario; and their legal challenge to win same sex parent adoption in Ontario in 1995 following the defeat of Bill 167.

ona Greenbaum with her partner, Nicole Paquette, started the Lesbian Mothers Association of Quebec (LMA) in 1998. At the time, clinics in Quebec would not provide access to donor insemination to lesbians. The LMA provided a social support group initially, but quickly became an advocacy organization seeking social and political change. When a bill to recognize Civil Union was introduced in Quebec, they seized the opportunity to fight for same sex parenting rights and recognition. In a landmark vote in 2002, their work resulted in a precedent setting victory when the Government of Quebec re-wrote the filiations sections of the Civil Code of Quebec to include same sex couples.

Martha McCarthy, was the lawyer for M in the M v. H case, starting in 1992. ‘M’ was suing her former partner ‘H’ for a financial settlement and support payments. At the time, family law did not recognize a lesbian relationship, so the case proceeded as a challenge to the definition of spouse and to the exclusion of gays and lesbians from access to family law. In May 1999, the Supreme Court ruled in ‘M’ v. ‘H’ that Ontario’s Family Law Act violated the Charter by excluding same-sex couples and ordered the Ontario government to change the law. The ‘M’ v. ‘H’ case and a growing number of charter victories by gays and lesbians resulted in a wave of legislation across Canada to recognize same-sex relationships in common law.

In April 1997, James Chamberlain, a kindergarten teacher in Surrey, British Columbia, introduced three new books to his class: “Asha’s Mums”, “Belinda’s Bouquet”, and “One Dad, Two Dads, Brown Dad, Blue Dads.” The books depicted same-sex couples with their children. Surrey became the front-line of a battle over what role ‘Christian family values’ should play in education. The controversy over the three books pitted James Chamberlain and his union, the B.C. Teacher’s Federation (BCTF), against the Surrey School Board in a case that would ultimately lead to the Supreme Court of Canada. James Chamberlain and co-teacher Donelda Henderson give a background on the case, and read from one of the books.

George Hislop talks about his life with his partner Ron Shearer and the fight for survivor pensions for same sex couples. Apioneer gay activist, George Hislop was a founder of the Community Homophile Association in 1971 in Toronto and the first openly gay person to run for public office in Canada, when he ran as a candidate for alderman in the municipal election in Toronto. George met his life partner, Ron Shearer in 1958 and they were together for 28 years until Ron’s death in 1986. George joined the legal challenge to fight for access to survivor pensions for same-sex couples. George died, at the age of 78, on October 9, 2005. The case continued in his name. On March 1, 2007, The Supreme Court of Canada ruled unanimously, that the denial of survivor pensions to same-sex spouses whose partners died before 1998 was unconstitutional. Nine years after launching their case, gays and lesbians whose partners had died between the proclamation of the Charter in 1985 and 1998 could now claim survivor pensions.

Nancy Rosenberg, a lawyer at CUPE's national office in Ottawa, talks about her case to fight for the extension of survivor pensions to same-sex couples. In 1992, the Canadian Union of Public Employees amended the definition of “spouse” in its employees’ pension plan to include same-sex spouses. However, Revenue Canada refused to register the amendment because it did not comply with the opposite-sex definition of spouse in the Income Tax Act. So Rosenberg and her union, CUPE took the case to court. In 1998, the Ontario Court of Appeal ruled in the CUPE / Rosenberg case that the Income Tax Act of Canada was in violation of the Charter in denying same-sex couples access to pensions. The CUPE/Rosenberg case forced the Federal government to rewrite the Income Tax Act of Canada to recognize same-sex couples.

These are selected shorts from the Nancy Nicol collection. Other interviews on relationship recognition and LGBTIQ parenting rights are available on site at the CLGA; and include the following people:

Douglas Elliott (lawyer for the Foundation for Equal Families in M. v H. and for Hislop v Canada)

George Hislop (founder of the Community Homophile Association of Toronto: CHAT in 1971, first openly gay man to run for public office in Canada, ran for alderman in Toronto in 1980,litigant in the CPP case)

Dr. Kathleen Lahey (Queen’s University Law, author of Are We Persons Yet? Law and Sexuality in Canada, 1999)