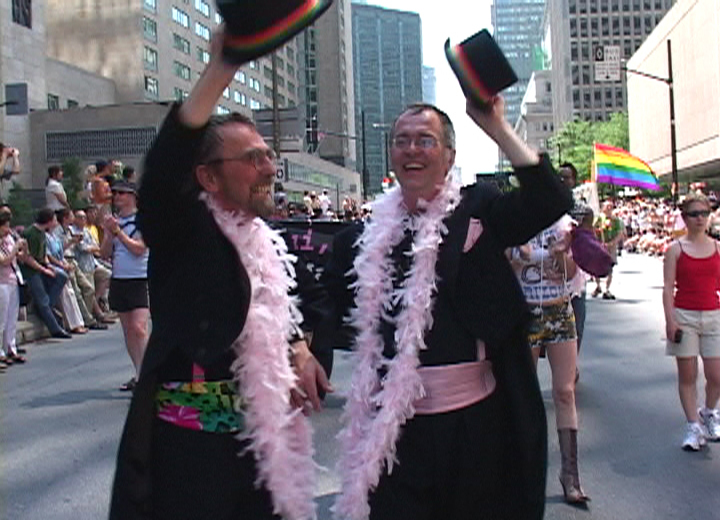 In 1999, a Supreme Court of Canada's decision forced the Federal government to bring in legislation recognizing lesbian and gay common-law relationships. The federal government passed the Modernization of Benefits and Obligations Act in June 2000, giving same-sex couples the same rights, benefits and obligations as opposite-sex couples. Gay rights activists and key lawyers seized the moment to challenge the Canadian government’s exclusion of same-sex couples from marriage. Starting in 1998 in Montreal, Michael Hendricks and René LeBoeuf launched a legal challenge for the right to marry when they applied for a marriage license. Michael and René, with the press in tow and armed with a marriage registration form which they had doctored to read, ‘husband and husband’ instead of ‘husband and wife,’ attempted to file an application to marry, and were refused. In May 2000, Martha McCarthy, the lawyer for M v H, filed a case in Ontario on behalf of seven couples seeking the right to marry. And also, in 2000, Egale Canada, represented by their lawyer Cythnia Petersen, initiated a marriage challenge with five couples in B.C. . Egale’s five couples were joined by three more couples represented by B.C. lawyer, Barbara Findlay, and together the eight couples in B. C. filed their case for the right to marry. Then on January 14, 2001, the Metropolitan Community Church of Toronto (MCCT) married two couples using the process of declaring the banns, a process recognized under Ontario law which provided a way to marry the couples without a marriage license. Same-sex marriage became legal in Ontario on June 10th, 2003, and later was recognized Canada-wide with the Civil Marriage Act's enactment, July 20, 2005.

Canadian Supreme Court ruling on equal marriage, Reference
Interview with Chris Vogel and Richard North, as they discuss their marriage in 1974

Chris Vogel and Richard North, talk about about gay liberation in Winnipeg during the 1970s. They discuss same sex marriage during the 1970s in the USA and talk about their marriage in 1974. When they were unable to get a marriage licence they used the process of declaring the bans in church. They discuss predominant views about homosexuality at the time, their fight to change those views and the impact of their marriage in that struggle.

From Russia in Love

This documentary short features Irina Shipitko and Irina Fedotova-Fet, two Russian women who came to Toronto in October 2009 from their home in Moscow to be married, after their application was denied by the Moscow State Registry Office. The film includes a press conference with the two women, interpreted by their lawyer Nicolas Alexeyev, commentary by immigration lawyer, El Farouk Khaki, and a greeting by then Toronto Mayor David Miller. The press conference is followed by the marriage ceremony conducted by Justice Harvey Brownstone, and a speech by Helen Kennedy, Executive director of Egale Canada. Directed by Nancy Nicol, October 23, 2009.

Clip is an excerpt from the March of Hearts which took place in Ottawa on March 6, 2004. Speakers include: Paul Hesse, Queer McGill, and Gilles Marchildon , Egale Canada.

These are selected shorts from the Nancy Nicol collection. Other interviews on the campaign for equal marriage are available on site at the CLGA, and include the following people:

Libby Davies, (Federal MP, House Leader for the NDP at the time of the debate on marriage equality)

Mark Holland (Federal MP, House leader for the Liberals at the time of the debate on marriage equality); Avvy Go (Asian Canadians for Equal Marriage)

Dr. Kathleen Lahey (lawyer for three of the B.C. couples in the same-sex marriage case, author of Same-Sex Marriage: the Personal and the Political, 2004)