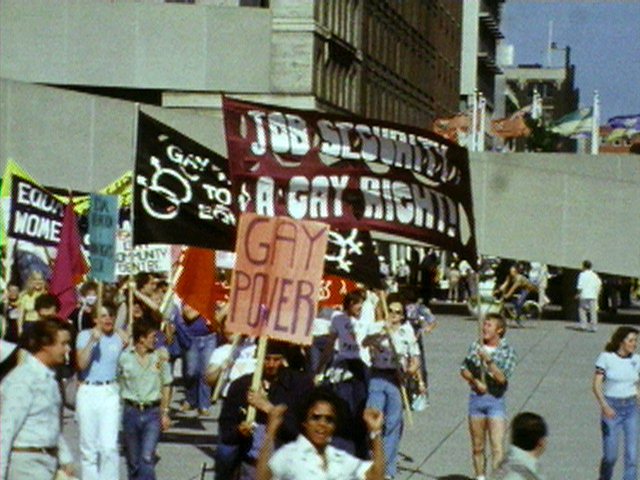 The struggle for protection from discrimination was spearheaded by individual cases of employment discrimination such as that of John Damien, a racing steward fired by the Ontario Racing Commission in 1975 because he was gay; Barbara Thornborrow, the first lesbian to publicly protest when she was dismissed from the Canadian armed forces because of being a lesbian, and Doug Wilson, a gay activist in Manitoba who was dismissed from his teaching position because of his involvement in gay liberation.

By 1981, in the context of growing opposition to gay rights, the Ontario Legislature defeated an amendment to include sexual orientation in human rights legislation. Following the bath raids and the defeat of the Human Rights Amendment in 1981, activists renewed their efforts and organizing grew in size and diversity. In the context of the election of a Liberal/NDP coalition government in Ontario and passage of the equality provisions of the Charter of Rights and Freedoms federally, activists re-launched the Human Rights Amendment Campaign in 1986. Chris Bearchell, who wrote the new brief for the Ontario legislature, describes the hopes of a generation:

In January 1975, a province-wide coalition, the Coalition for Gay Rights in Ontario (CGRO), was formed to coordinate efforts to advance lesbian and gay rights. One of the first things the coalition did was to prepare a brief which was distributed to all members of the legislature, called: ‘Discrimination and the Gay Minority.’ The brief documented cases of discrimination in housing, employment and services and called for amending the Ontario Human Rights Code to include protection from discrimination on the basis of sexual orientation. “There was a kind of excitement about our chances this time. We did large scale leafleting of bars in some of the bigger cities. There was a generalized awareness on the part of people that this campaign was part of a history and that there was an opportunity here that was new.”

On December 2, 1986, the Ontario legislature voted (64 to 45) to include 'sexual orientation' as a prohibited ground of discrimination in the Ontario Human Rights Code, making Ontario the second province (after Quebec) to enshrine such protections.

Interview with Barbara Thornborrow, on anti-gay discrimination in the Canadian military

Interview with Tom Warner, discussing the civil rights strategy and Coalition for Gay Rights in Ontario

This video is an excerpt from an interview with Tom Warner (2001-11-03) as he discusses the civil rights strategy of including sexual orientation into Human Rights legislation in the 1970s. He also talks about founding the Coalition for Gay Rights in Ontario, bringing together 11 groups across the province in the face of public discrimination and harassment.

David Rayside, Right to Privacy Committee and University of Toronto professor gives a account of the fight to pass Bill 7 in Ontario, a bill to include protection from discrimination on the grounds of sexual orientation in Ontario Human Rights legislation. David talks about the role of the Coalition for Lesbian and Gay Rights in Ontario and the Right to Privacy Committee in working to support the bill, and the opposition from the Catholic Church and the religious right including Real Women of Canada to the bill.

And excerpt from documentation of the Gay Freedom Rally, held in Toronto on November 20, 1986 to support of the passing of Bill 7 in Ontario, to include protection on the grounds of sexual orientation in Ontario Human Rights legislation. The excerpt features a speech by Margaret Atwood. Video documentation from the CLGO, videographer unknown.

These are selected shorts from the Nancy Nicol collection. Other interviews on the civil rights strategy and the Human Rights Amendment Campaign are available on site at the CLGA, and include the following people:

Gary Kinsman, (Right to Privacy Committee (RTPC), Gays and Lesbians Against the Right Everywhere (GLARE), and author of The Regulation of Desire, 1987)

Marie Robertson (Lesbian Collective of Waterloo, Gays of Ottawa: GO, Coalition for Lesbian and Gay Rights in Ontario: CLGRO; Barbara Thornborrow, (the first member of the Canadian military to go public on lesbian discrimination in the military)