Community Building and Activism in the 1990s 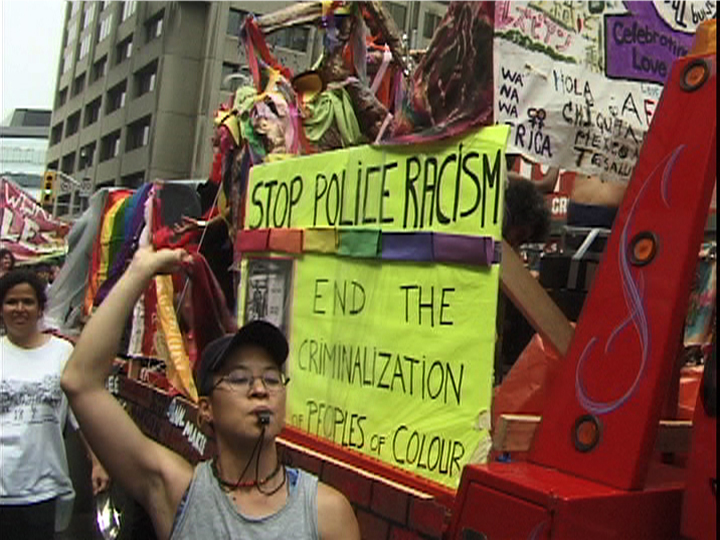 Many of the activists involved with struggles for human rights and relationship recognition contributed to several campaigns and issues affecting LGBT people. During the 1990s, LGBT organizing continued to grow in strength and diversity, and a new generation of activists raised new concerns and issues. At the same time, opposition to LGBT rights continued, including escalating acts of violence and homophobia, which required a response. Ethno-racial community organizing grew in strength and confidence alongside older predominately white gay-liberation groups. Their efforts contributed to the movement's strength and maturity, challenging backwardness and racism within lesbian and gay organizations and homophobia within ethno-racial communities in Canada – transforming the movement and laying the groundwork for the future.

Clip is a record of a demonstration that took place outside of the Second Cup on Yonge street in the Church-Wellesley village, on October 21st, 1994. The rally was held in response to a violent attack on Ross Mulhearon and Steve Tait in the same spot, the weekend before. The clip features rally speaker Bob Gallaghar discussing the experiences of two victims and calling for change, rally signs, and protesters. Chants include "We're here, we're queer, we're not going away!" and "No more violence!". Film by Nancy Nicol, October 21,1994.

Interview with Dr. Allan Li on the AIDS response, racism and barriers, and the founding of ACAS

Dr. Alan Li talks about the response to HIV and AIDs and discusses racism and barriers within the mainstream white gay community organizing. He addresses specific issues affecting racialised communities and focuses on the establishment and work of Asian Community AIDS Services (ACAS). He relates the story of one of their first clients to illustrate how stigma and insensitivity to the specific needs of Asian gay men affected them and their access to services. Alan speaks to the growth of organizing by racialized communities and on-going need to recognize their voices.

Suhail talks about the program for new-comer youth developed by Supporting Our Youth: SOY, a program which he leads that supports racialized new comer youth as well as black queer and Trans youth. He addresses issues of isolation and persecution that queer new comers face. He gives examples of the experiences of queer refugees and describes the barriers they face in attempting to access mainstream predominately queer community organizations in Toronto. He also talks about his personal experience coming to Canada as a new-comer. He also talks about Salaam, a queer Muslim group that he is active in. He talks about the growth of anti-Muslim racism following 9/11 and the fact that Salaam was forced by world events to be more visible - working in alliance with mainstream Muslim organizations to address racism - which in turn raised the visibility of queer Muslims.

These are selected shorts from the Nancy Nicol collection. Other interviews on Community Building and Activism in the 1990sare available on site at the CLGA, and include the following people: