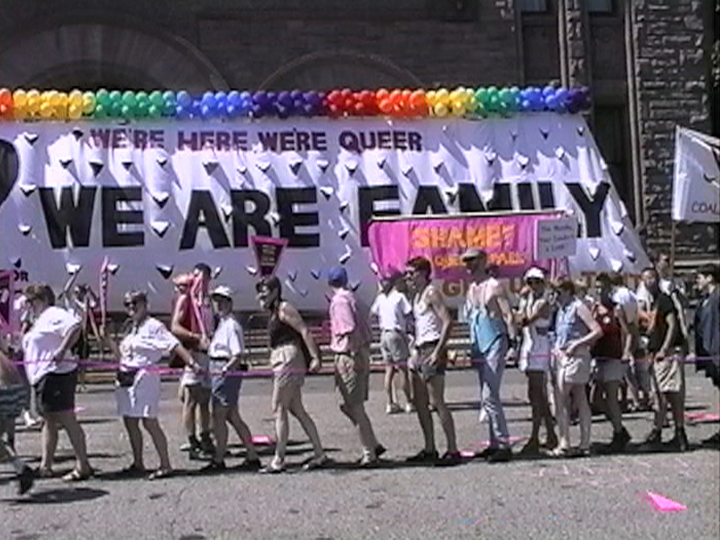 Part one captures some of the spirit of 1970s Gay Liberation politics through a montage of images including: the first demonstration in Canada by gays and lesbians (Ottawa, August 1971) organized by Toronto Gay Action, the first Toronto Pride (1972), images from the pages of Canada’s only gay liberation newspaper of the era (The Body Politic, TBP, 1971-1987), the first anti-discrimination cases mounted by John Damien and Barbara Thornborrow and the 1st Gay Liberation National conference in Ottawa (1975).

Part two focuses on the backlash to the emerging lesbian and gay movement in the mid ‘70s to early 80s. Anita Bryant brings her homophobic ‘Save the Children’ campaign to Canada and police repression against gay community establishments intensifies culminating in the bath raids on February 5th 1981, the largest mass arrest in Canadian history since the War Measures Act in Quebec. The Ontario legislature refuses to pass legislation to include non-discrimination on the basis of sexual orientation in the Ontario Human Rights Code. The gay community responds with growing anger and organization.

In the wake of the bath raids, Pride Day becomes an annual event in Toronto. The Coalition for Gay Rights in Ontario (CGRO) continues the campaign for Human Rights protection and publishes a mass distribution leaflet entitled: Who are These People and What do They Want? LGBT communities of colour emerge and build organizations. In 1986, the Ontario legislature passes non-discrimination on the basis of sexual orientation in the Ontario Human Rights code. Pride 1987, the Right To Privacy Campaign (RTPC) and CGRO lead the largest Pride Day march in Canada to date with a banner: “Rightfully Proud”.

Against the backdrop of the AIDS crisis, lesbians and gays organize to win recognition of their relationships. A bill to recognize same-sex relationships is voted down by the Ontario legislature in a storm of homophobic rhetoric and the Campaign for Equal Families surrounds Queen’s Park in a huge protest. Jim Egan and Jack Nesbit win a precedent setting ruling of the Supreme Court that for the first time recognizes discrimination against same-sex couples under the Charter.

In 2000, CLGRO celebrates 25 years, common law same-sex relationships are given recognition and by 2005, same-sex marriage is passed into law. Pride Day becomes increasingly international and the Dyke March grows into a major event. 2006, Pride marks the day by drawing attention to the conditions facing lesbian, gay, transgender and bisexual people internationally – leading the march with the banner: We March For Those Who Can't .