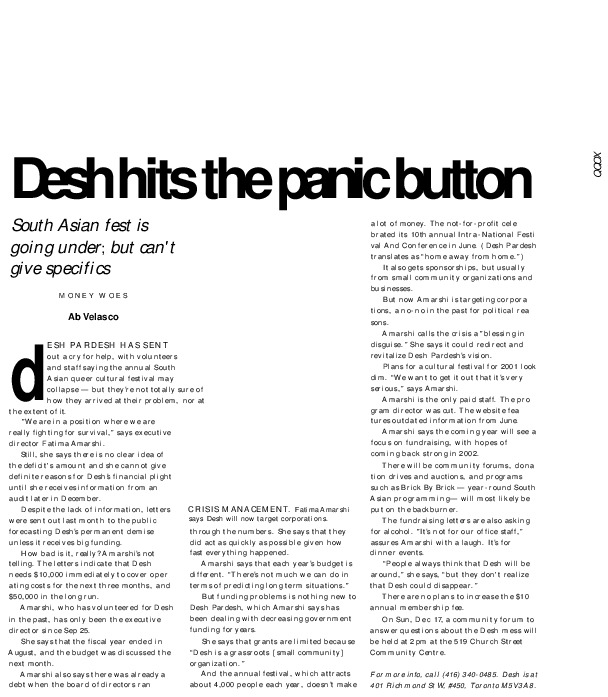 This image depicts a news article that describes the kind of financial trouble that Desh Pardesh was facing in 2000. 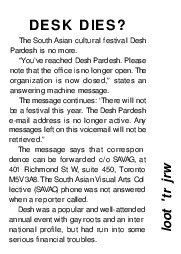 This image depicts a news article that discusses the final closing of Desh Pardesh after the several problems it had faced.

Leah Lakshmi gives her perspective on the use of South Asian as a unifying element to the festival. She also notes the importance of Desh and observes that this festival took place at a time before capitalists paid attention to “South Asian” culture. As other interviews say, after Desh, South Asian aesthetics began to be more appropriated and exploited.

LL: My name is Leah Lakshmi Piepzna-Samarasinha and I first encountered Desh Pardesh in 1996 and 1997. I grew up in Worcester, Massachusetts, not in Canada, which is a very rust belt, working class, economically depressed, small city in the northeast. And I came to Toronto in the late 90s because there was an incredible queer people of colour arts and activism scene, of which Desh was a huge, huge part. I also came because I'd grown up, like many South Asians, in the United states had in the 80s and 90s, very, very isolated. There was a small Indian community, but me and my father were the only Sri Lankans in Worcester. And we would meet other Sri Lankans when our families would come and visit. We had cousins who would come and stay, and my grandparents, but it was amazing to come to Toronto, period, and find this enormous refugee Sri Lankan community, and this even larger South Asian community that was incredibly diverse.

Some of the things I remember about Toronto, in general in that time, was hearing that it was not only the oft-quoted (laughs) most-diverse city in the world, but that it was ten percent South Asian. And being in Toronto meant being in the in city where South Asian meant Indo-Caribbean, Sri Lankan, Bengali, Kashmiri, you know, Punjabi, South Indian, from the Maldives, South Asians from South Africa, I knew people who came from all of those communities. And in terms of that political moment, it was at a political moment where South Asian had not become hip or culturally on the map yet, or consumable by white capitalism. We were these smelly dirty people, we didn't (laughs) have any cache, and because of that we faced oppression, along with other reasons, but it also left us a lot of room to find each other and to define ourselves. Some of the things that I remember feeling were that in Toronto in the 90s every person I knew who was South Asian had grown up with African, Caribbean, Black, Latino, Indigenous, East and Southeast Asian folks, and there was an incredible amount of pan-Black, Indigenous and people of colour solidarity.

Everyone, almost everyone seemed to be working class, or barely lower middle class. Everybody had grown up in Regent Park together. and even though we talked about differences between blackness and brownness, there just felt like there was a lot more class commonality in terms of police profiling, racism, oppression, immigration, and also solidarity. So in the middle of all that, Desh Pardesh was this incredible, incredible political and cultural institution. I know, believe me, I knew there was a lot of drama and struggles, but as a twenty one year old kid who was this mixed race Sri Lankan queer femme girl, who had been a part of student of of colour organizing in New York, but had never really been able to hang out with all South Asians from across the diaspora, coming to Desh meant coming to this cultural space where South Asian was queer, it was very very very intentionally not just about a bunch of North Indian upper middle class, upper caste people.

In the following clip Ian Rashid discusses what he wanted Salaam Toronto to do in the multicultural ideology that was becoming common around the late 1980s, early 1990s.

IR: Oh I wanted to disrupt the sort of happy multicultural idea, and I was afraid that Salaam would become something like that. I don't think it was, because it was in the queer context, but in the south it was awful. [Inaudible] in West Brooklyn, tended to be inside the South Asian community and outside the mainstream community - and challenge that a bit. And so I invited [inaudible], and so I invited activists and writers to choose a piece of writing that they felt spoke to their experience about being South Asian and uh, actually I can't remember, Kaushalya Bannerji wrote something, there was a poet who is no longer with us Michael Lin was a very important queer poet and activist at the time, founded AIDS Action Now, he read something, but by an Indian writer. It was sort of slightly cross cultural but it was trying to penetrate the geopolitical engagement in this sort of otherwise multicultural festival.

Both Nitin Deckha and Mark Haslam also talk about Desh’s contribution to conversations around multiculturalism.

ND: Desh Pardesh was concerned with what I might call critical, or perhaps even radical multiculturalism. It politicized, it problematized multiculturalism beyond, you now, the happy song and dance of different ethnicities or cultures that was often at the foreground of official multiculturalism. The works we showcased were explicit in discussing racism, otherness, marginalization, exotification, appropriation, and other cultural-political concerns. Desh Pardesh also complicated notions of home, belonging, community, probing the dynamics of acculturation and assimilation, and what constituted Canadian identity.

In the following clip Ian Rashid discusses what happened to earlier collectives like Khush after the end of Desh Pardesh, and the development of new organizations.

IR: And then it sort of went away, you know I think SAVAC emerged from it, ASAP emerged from it and their goals seemed viable and relevant, from what I gather, you know I don't know the organization's well. Khush certainly gave up the ghost, and splintered into more ethnicized and religious cultural groups. But, yeah. The need for those initial groups seemed to kind of wane.