On this page, you will find documents and audio concerning the period just before Desh's apex. 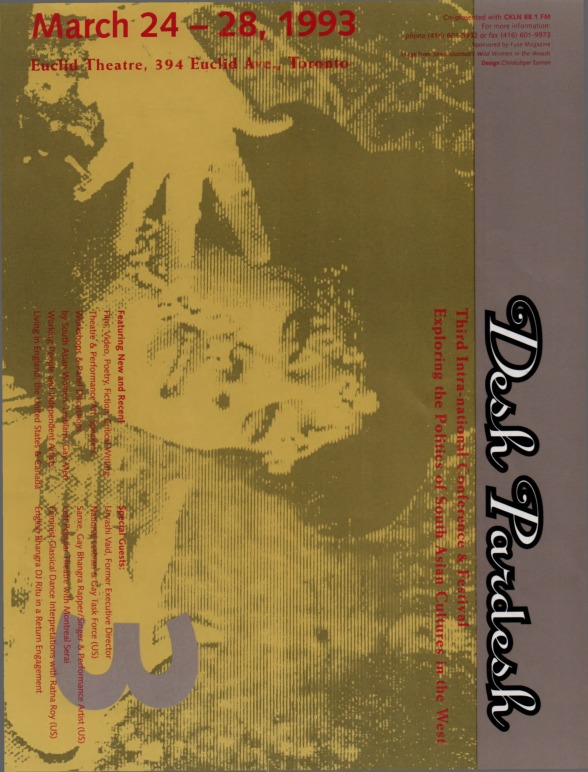 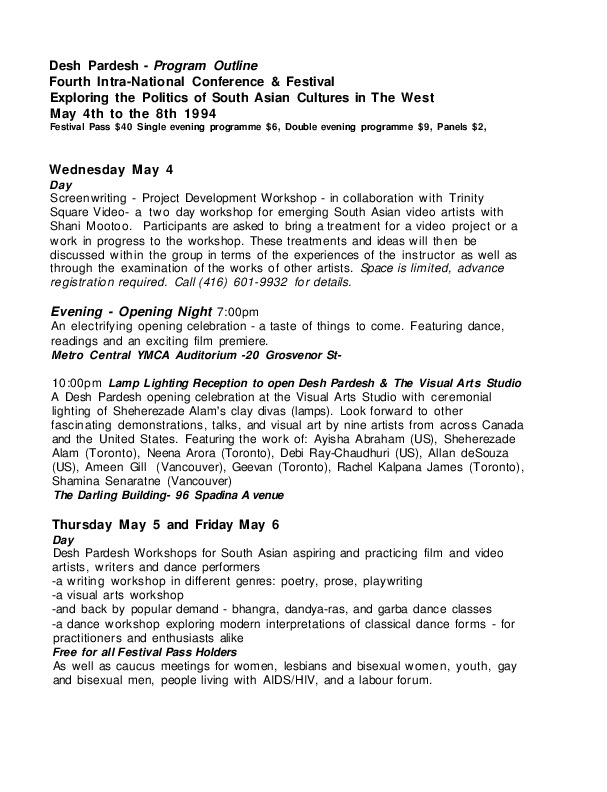 Another concern some Desh participants expressed was the intergenerationality and other demographics at the festival. Here is a sample of Pamila Matharu’s interview, where she gives her opinion on the age dynamics, and the diversity of skill sets within the organization. She also talks about what she felt being part of Desh’s community and how it helped her to shape her identity.

AM: and did it feel sort of like...um uh mentorship in a way where there was sort of older generation people involved, younger...like was it intergenerational?

PM: It was! I mean as a young person, um of course grown up in South Asian culture like, elder worship is taught to you since you were born right? Like the moment you come out, you're practically, you're guided through learning life through elders, you know so, yeah I had that in mind where I thought that I am maybe looking at an older artist's career, whether it was a poet, or a writer or a filmmaker or, a visual artist. But now as a practicing artist, I understand when you're in your mid-career, or you're a senior artist, and how you look at someone who is just, emerging, you know you're considered the kids in the scene. It’s different right? It’s our different lenses of how we appreciate those things and our entry point of understanding what it is that we're doing.

PM: Everything! Yeah people who were in arts administration, were also practitioners, but might not have...I mean the very existence of Desh was the idea to penetrate the mainstream because the mainstream wasn't serving us right? So it wasn't in the galleries, it wasn't in the published work, it wasn't in anything. We had to make that platform where we could serve us as artists you know? So yeah umm so people were everything, like in the sense that you couldn't really hold one identity. You had to be a multiplicity of identities as artists, as producers, as cultural producers as makers, as you know, I would say probably the stake holders. The funders didn't necessarily look like us. Right? So you had to build that. You had to build that means of understanding how to explain that this needs to...that this is important work that needs to be funded right? Rather than just you know the major funding that came from the funding agencies, and non-profits, and whether it was venues or you know...And mind you I like I'm coming into it at probably at its critical success like, so I wasn't in those 89/88/89/90 when Kush first formed and this venue for creative expression was made. So it was almost like the bed was made for me and it was my choosing to lie in it comfortable. It was a really comfortable, charmed kind of you know, coming out experience as an artist I would say for sure. Yeah.

AM: What do you mean by "coming out experience as an artist"?

PM: Well, I mean, I know we often use "coming out" in the term or expression around like, you know coming out and disclosing your sexual orientation, but I think there are several kinds "coming out", whether, whatever society might have deemed as a social ill but you know. Desh really became a platform for you know, we weren't necessarily makers of Bollywood—And I say that in quotations cause I think true Indian cinema or Indian cinephile, you know, don't like that. There had to be an alternative to that and that’s what we were right? Just like punk was to pop you know, so then now became our cultural expression, and who we are right? Because we were consumers of the same punk that those other people were consuming. There was a difference, you know? So umm...and that difference was the fact of the place that we came from, our stories, our identities, and who we were right? That’s the "coming out". Like it was really you know kind of an acceptance. We weren't freaks and it felt really good to be apart of that community you know? And to be accepted and kind of like, "oh yeah your family doesn't understand you as an artist? Yeah mine too" like cool lets...lets...you know...

In the following clip Shelly Bahl discusses the importance of giving space to visual arts and how that is often disregarded in professional spaces.

SB: Yeah. I think that the first thing that came up was that with a festival format, visual art is not a great fit. Visual art shows generally, they tend to be a different kind of preparation and lead up. They need a different kind of physical space. A lot of it would be logistics of space and the fact that visual arts works, especially if you are dealing with installations and delicate things, you know they can't be inside of, let's say, a theatre format where you'd be having people up on the stage. Right? And so, in realizing that people who perhaps deal with performance and other media don't really quite know how to professionally, there's a lot about professionalism, they may know how to really put on a great show on a stage, but, the attitude was "hey, with the visual art just kind of stick it up on the wall in the corner." As people who not only make art but we also, it's really key how that art is presented. So when you actually realize that there are a number of you that could really push to say, well no, visual arts can't just kind of be in the corner of the theatre. It needs light, it needs space, it needs something else. And, so I think that's where, when those conversations started that the work is just not getting any visibility or it's poorly displayed or, it's just unsafe for the work. People may knock it over. That's where the search for the, the idea for, a search for a professional gallery space started. So then, I think, and then, because the majority of people involved with Desh did not have that expertise. They were like "well what don't you guys find a space and we'll try and make it work." So that's where those conversations started (0:12:38). Even the show that Sharon did was, I believe at Art Metropole and was my first professional show outside of the University waters. 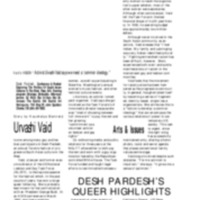 This image depicts a news article that discusses a film by Urvashi Vaid, that was to be viewed at the 1993 Desh Pardesh. The image also has a smaller box that highlights the other LGBT centred film to be played that year. 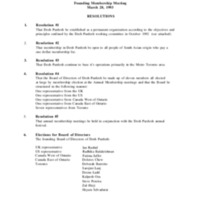