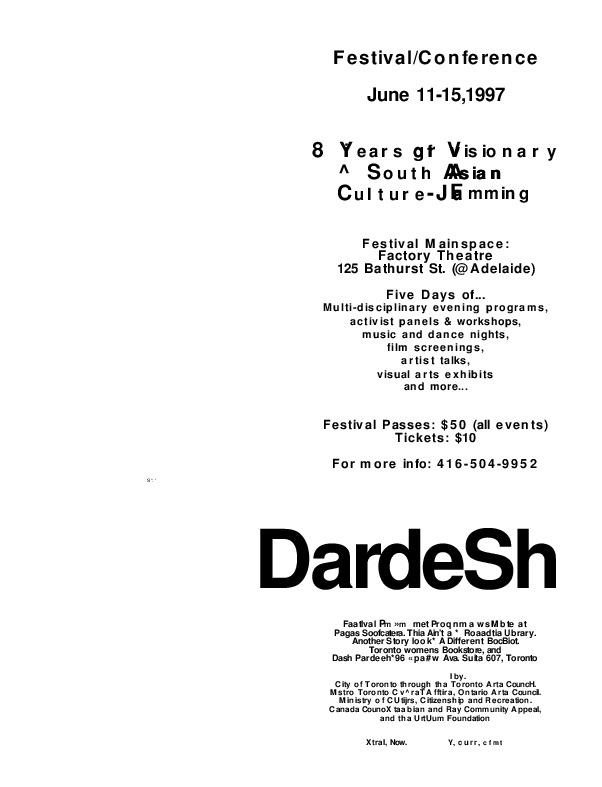 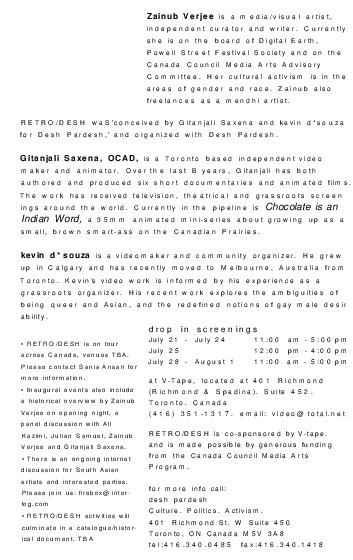 In the latter half of the 1990s, Mike Harris rolled out his massive welfare, education, and transportation funding cuts. His major reform was in welfare, wherein the program lost 22% of its funding and a much greater burden was placed on the municipal government. Desh Pardesh also experienced effects from the cuts that the Harris government rolled out. This was happening in the background of the years that the following clips discuss, and you can see it especially coming through when Zainub discusses the organizational issues Desh began to face.

In the following clip Zainab Verjee discusses the structural issues of Desh Pardesh in the context of her curation of Retro/Desh that took place that year. She discusses the leakage of identity politics into management.

AM: I  just wanted to be sure because occasionally it will cut out and just record straight from here but now it's recording from there. Okay. Turn this down again. Okay. So,  can you tell me about your experience you ended up curating retro Desh, and I would love to hear a bit about what your impression was leading up to that from your experiences from afar and from taking part in Desh. what vision was of the festival and then a little bit about your experience of curating.

ZV: well you know my I mean we were always quite excited that's something like Desh was happening because as I said, it was for that moment.  those were the things that were happening that were  really exciting and I think that you know because it was not solely an art event but it was intersection of politics culture and activism,  you know I think,  and so many things were at the table but I think you know you sense that things aren't going well or you wonder about things when in very public forum at particular event,  at a particular festival and they don't have the date now exactly, but early in the nineties,  where you know the politics and you know were getting sort of laid out on the table  any sort of very public manner  and a very sort of essentialist way  that was actually quite damaging and not constructive and not really, I mean I mean I understand that people have very strong political  agendas and you know activism along particular political lines but for a festival organisation and sort of you know organizing and administrative and board governance  structures that we're not able to really even understand, I think was really problematic and you know we saw and ours sort of rolled out in a very public way  and attacks against people  who had been invited to present their work and speak.  and people were being told – were silenced. So when that kind of stuff starts happening,  you actually kind of know that things are not running smoothly because in order for organizations like that to survive you need to have very clear mandates and governance and management. the politics cannot be played out at those tables.  the works and your politics and what you doing about it as an individual or as part of a community 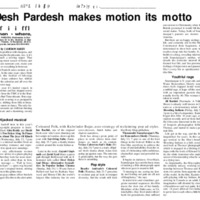 This news article describes a number of movies that are to be played at the 1998 Desh Pardesh festival. 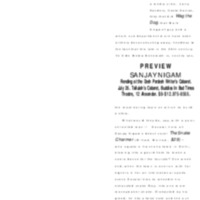 This news article provides a review for a movie to be featured at the 1998 Desh Pardesh called the Snake Charmer. 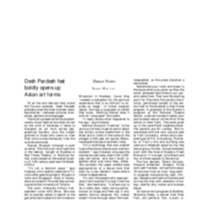 This image depicts a news article that describes the kind of cultural work that Desh Pardesh is doing by breaking boundaries of identity and tradition.