1988 was the first year of Salaam Toronto, the festival which would eventually evolve into Desh. It should also be noted though some interviewees felt that Desh Pardesh was a fairly intergenerational event, some dissenting voices felt that it lacked in this area.

In the following clip Sharon Fernandez discusses the experience of queer South Asian women prior to the becoming of events such as Desh Pardesh or Salaam Toronto.

SF: We were very marginal at the time and Toronto was very in the left feminist communities— the more progressive communities where you were able to fit in a little bit was really wide. So the women of colour, women like myself, that were activists or gay, we would be drawn to connecting with the men over at Khush, it was a way to be part of a community, so you know that’s what we did at that time we didn’t have a lot of options. you know we were either in the lesbian and gay community —which was pretty white, and we were in the feminist communities that was pretty white, so we did try to go to, you know, women of colour communities where we could feel more at home and we did. 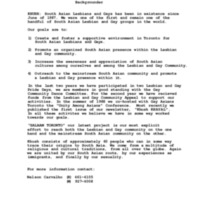 Khush began as a way to create a safe space for queer South Asians. Over time, these mandates would look similar to the objectives of Desh Pardesh. 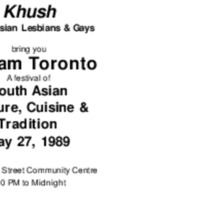 An event flyer for Salaam Toronto. 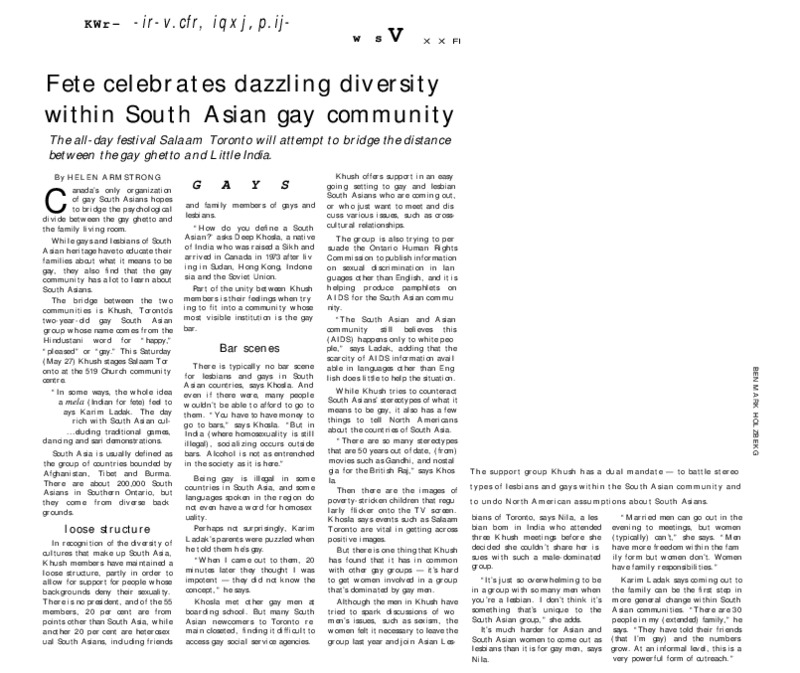 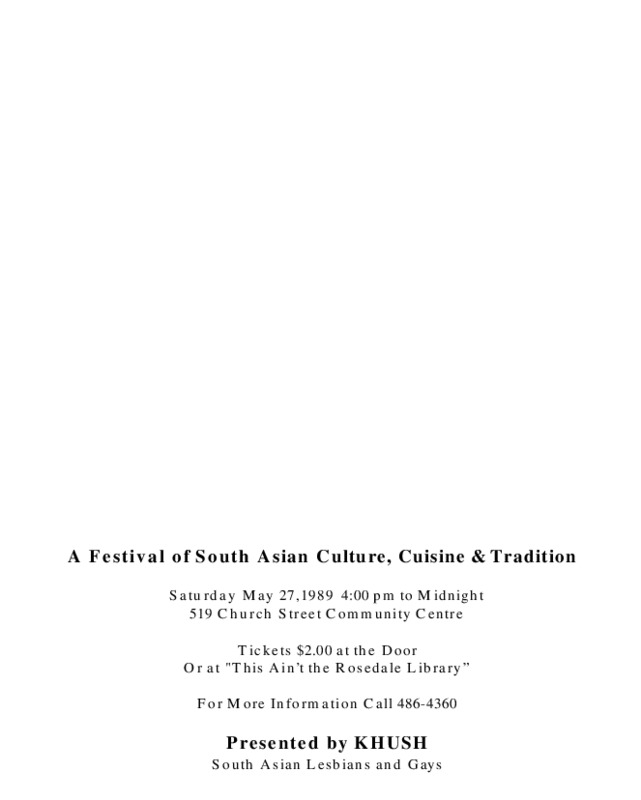 A pamphlet for the event. 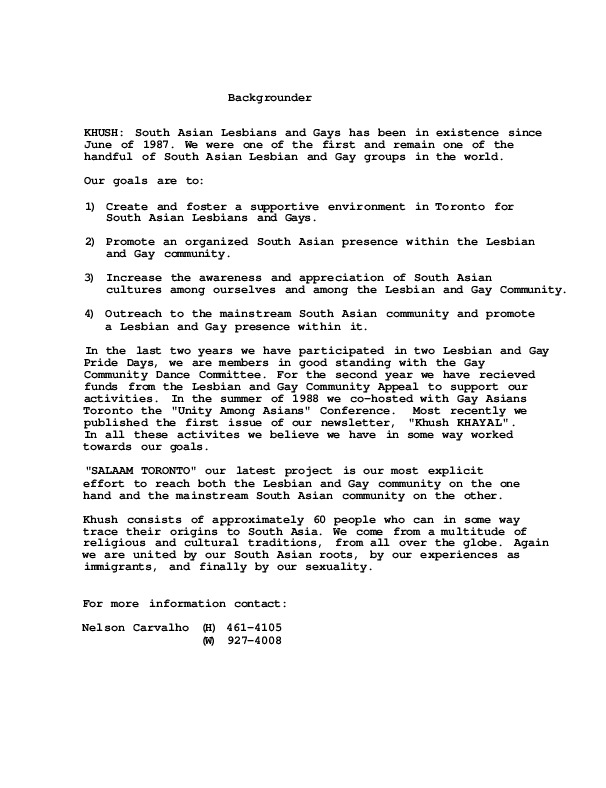 A document outlining the goals of Khush. These would look similar to the mandate of Desh Pardesh.

In the following clip, Ian Rashid discusses how the Khush group approached him with the idea of a new festival that deviated from the goals of Khush at the time. At this point they had not yet coined the name Salaam Toronto, but Ian discusses here the overall goals they established prior to its becoming.

IR: Uhm. If I recall correctly, it came out of Khush, and I was a member of Khush, but I think it was one of those ideas that emerged informally between probably between Nelson, and Corrine, and Mohammad, those guys uhm, that sort of socialized and always hung out, and I wasn’t - I didn't hang out with them, though I was part of the meetings at Khush. When I came, they brought it to a Khush meeting with the main idea already in place, with the idea being at the 519, they asked me to contribute, get involved which I did happily. I definitely was— I was there, but I wasn’t involved with the origin of the idea. I remember — I mean it was, for me I felt like it was a wonderful event. It felt slightly uncomfortable, a bit like caravan? is caravan still around? Caravan used to be a festival that Toronto, a huge festival in toronto that went on for years, it was very multicultural, so everybody kind of dressed, all the different communities kind of dressed in folklore from their home countries, eat the food of their culture, and so it became about homeland. Salaam Toronto sort of began, sort felt a bit like that. 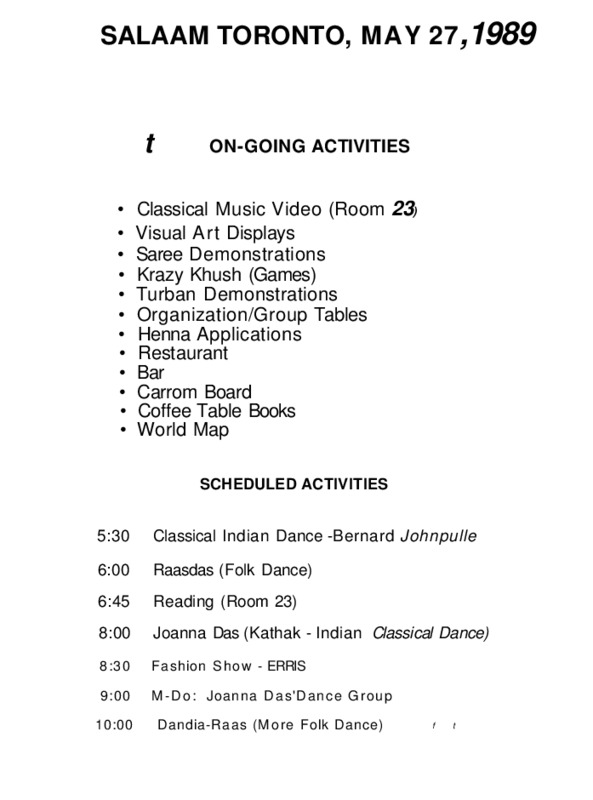 In the following quote Punam Khosla discusses the limitations of the Khush collective and how Ian Rashid was going to tackle these limitations in the reincarnation of Khush, Salaam Toronto, which was later to become Desh Pardesh.

PK: Yeah, that was the Salaam Toronto thing. So the first, it was basically a drag show and I wasn't interested in it. And everyone was like why weren't you there? This was like the event. I said, you know I'm not really interested in drag shows that's not my thing I'm busy. [laughs] But they were desperate to bring some lesbians on board because they really wanted to create this thing where there would be like, lesbians and gays and. At the time, I didn't fully understand what their impulse was, I didn't completely trust that it had the politics because none of those guys in Khush really had ever impressed me as being engaged in any politics. I didn't know them very well but, I knew that they, I knew some of the key people from previously in my life and I knew they were basically corporate hacks and you know, they'd lived a very different life. They were, they didn't have a class politics they didn't have feminist politics. They were Gay - but the rest of it was really missing and those things were core to my politics so I kind of maintained a distance. But, the second incarnation where Ian [Rashid] really took it from the Salaam Toronto to the first Desh was Ian trying to bring in and actually create a space.