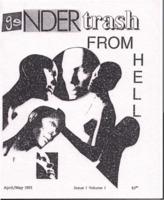 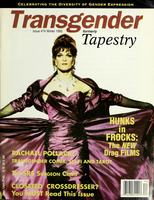 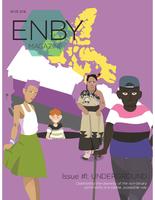 My Gender Is..., by Beena Mistry

A Quick and Easy Guide to They/Them Pronouns, by Archie Bongiovanni and Tristan Jimerson 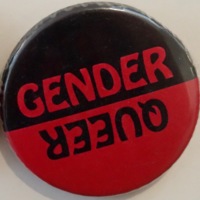 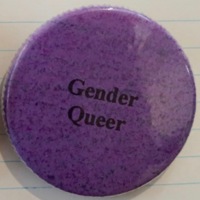 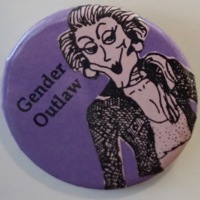 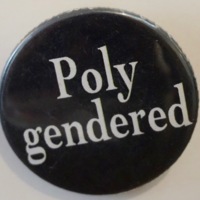 The word "genderqueer" was coined in the early 1990s and is credited to Riki Wilchins in order to "describe...those of us who were not only queer, but were so because we were the kind of gendertrash society rejected." Wilchins writes, "In a society where femininity is feared and loathed, all women are genderqueer. In a culture where masculinity is defined by having sex with women and femininity by having sex with men, all gay people are genderqueer."

The term was quickly picked up by others, and "welcome gender queers" appears in the welcome poem of the first issue of gendertrash, a Toronto-based zine that published five issues between 1993-1995, and published an incredible range of buttons through Genderpress.

The zine's editor, Xanthra Phillippa describes the frustration she felt in regards to the distance between the lesbian and gay communities and those who do not identify with the gender they were assigned at birth. Phillippa writes, "gender queers or gender outlaws are what we & only we are, since lesbians & gays seem to think that queer means lesbian/gay (& sometimes bi) only." This sentiment is also picked up by kiwi, another contributor, and is reflected in other trans-focused journals and magazines dating from this period.

For more on gendertrash and more of these incredible buttons, see the digital exhibition gendertrash: transsexual zine, 1993-1995.

The term "genderqueer," once solely a descriptive adjective, has since been adopted as an identity category in and of itself. For many people, genderqueer is a third gender, while others reject the entire concept of gender, and yet others straddle some line between female and male. "Genderqueer" serves as an umbrella term that can encompass each of these positions.

Things have been shifting. Genderqueer and other gender identities now have legal recognition under the law, we are seen in shows such as Billions with the nonbinary character Taylor; we have become more visible. As activist and organizer Monica Forrester suggests, "We're at a time in history where the transsexual and genderqueer community is freer; we can be who we want to be now. There's still stigma, but we can have our own identities. We have shifted enough people to be seen in a different way."

And yes, we have a flag.

The genderqueer flag was first created in 2010 by Marilyn Roxie, and updated into its third and final version in 2011. The lavender top stripe represents the mixing of blue and pink, the two colours associated with masculinity and femininity respectively. The centre white stripe represents agender and gender neutral identities, and the chartreuse bottom stripe is considered the opposite colour of lavender, and represents the third gender. The three identities are intended to be seen as interrelated. According to Roxie, the flag is intended to "help create visibility for the genderqueer community and related identities."

A Queer Memory: A Collection of Thoughts on Gender and Family by Noah Hurlbut articulates the struggle of trying to look back through one's memories to try to find "proof" of one's identity through memory, rereading the past to find clues to who one is today. It's a fraught process, and one that may help provide a narrative arc, but it can also feed into the idea of trying to "prove" one is "trans enough" to count in some abstract tally. Hurlbut also shares the struggle to navigate a society obsessed with binarism and the struggle to be seen and understood as the person they are, rather than the person it is more convenient to see.

In Bitter Feels: A Non-Binary Femme Affirmation Zine, Billy Star expresses their inner turmoil when their dead name is used. (A "dead name" is often a name assigned at birth that a trans* person does not identify with. Using it against someone who has expressed their new name is an act of aggression.) They also feel wounded when people use the wrong pronouns for them. Both of these sentiments will be familiar to anyone who has experienced this. Star writes, "I think gender is not something fixed, and it's all right if it change[s] over time. I really live in the "now," and right now NON-Binary is the way I view myself." Allowing oneself the space to figure things out is important, and this little zine's personal affirmation articulates that well.

ENBY Magazine has published three issues so far, and is written by and for people who do not identify within the gender binary. Articles within it look at gender in a French language context,

Introductions that feature pronoun declarations are becoming more common, particularly in group settings. The intention behind them is honourable: letting people know that it is a safe space where you will not be misgendered. However, this doesn't always follow in practice, and it can be further complicated in situations where participants speak multiple languages, some of which do not have gendered pronouns. Further, genderqueer and other trans* people may not want to "out" themselves in front of people they are unfamiliar with.

In 2011, genderqueer comics artist Elisha Lim was interviewed for Xtra, a magazine which at the time refused to use their correct pronoun. Xtra's editor demonstrated limited faith in the intelligence of their readership, suggesting that it would be "too confusing." This sparked a boycott, a petition, and musician Rae Spoon turned down the opportunity to be on the cover of Xtra Ottawa, and instead posted a thoughtful response on Tumblr. Eventually Xtra relented, but it was troubling to see transphobia on display and then ardently defended.

"They" has been used as a singular pronoun since the 14th century, and has been widely accepted in style guides for decades. The Chicago Manual of Style listed it as early as 1993, and they have a handy guide to usage posted on ther blog, CMOS Shop Talk. The Washington Post promoted its use in 2015, As of yet the Canadian Press Stylebook does not include guidelines on the singular "they," and instead push the onus onto journalists "to represent their sources respectfully."

The majority of genderqueer people in English Canada would appear to use they/them/their as singular gender neutral pronouns, but there are a wide variety of others that people use, including the binary she/her/hers and he/him/his, or alternate between various pronoun sets. There are also those who use solely their name, and eschew pronouns altogether.

Recently, French Canadians have begun using "on" as a gender neutral pronoun, though some people will alternate between "elle" and "il," or use them interchangeably.

For more on the pronouns used by people who identify outside the binary, see A Quick and Easy Guide to They/Them Pronouns by Archie Bongiovanni and Tristan Jimerson, which includes a handy reference chart of alternatives, and also Susan Stryker's Transgender History.

The only way to know what pronouns a person uses is to ask, and to do so preferably in a comfortable and safe setting. How you ask can be important. A good question might be "What are your pronouns?" rather than asking "What pronouns do you prefer?," which suggests that a person's pronouns are a preference, rather than something core to their being.

The title Mx. is often used instead of the gendered Ms. or Mr. Some change their name to a non-gendered name, use only initials, or including names that are conventionally understood to be neither masculine or feminine.

It is important to recognize that there are no defined looks, dress, habits, behaviours, genital or body configuration, etc. that characterizes a genderqueer person, or, necessarily, anyone else.

Binarisms, Kari Weil writes, "establish a system of stable opposition and, hence, stable meaning through the other differences they conceal." Genderqueer people may reject this binary and destabilize it. Conceptions of what is appropriate for a gender depends on "culturally available symbols," and these can "evoke multiple (and often contradictory) representations."

Genderqueer people may or may not be aware of and reflective of how they are performing gender, or they function as active participants in the social construction of their gender. Anna I. Corwin's research determined that "genderqueer individuals draw on the gender binary, are restricted by it, and creatively resist it, creating new gender expressions." Corwin notes that "[g]esture and embodied performance are significant practices through which individuals construct novel identities and genders. Embodied expressions and linguistic performance can provide a physical disruption to binary constructions of gender."

That said, there is a temptation to internalize illegibility as a personal failing. However, a piece of clothing is not inherently gendered and neither are other adornments, such as makeup or jewellery. As Holly Boswell writes, "Once the concept of gender is freed from various cultural expectations of sex, the terms masculine and feminine become so relative that they are virtually meaningless." Our associations of these things with gender are cultural, present differently across different cultures at different times, and are subject to change.

In some cases, genderqueer people may use surgical transformation to alter the physiological characteristics of the body to alter gender signification. This can include hormone therapy, chest surgery, and other gender-related surgeries. However, it must be noted that gender signification is always dependant upon and "interconnected with other culturally relevant categories such as class, ethnicity, and community practice." As such, gaining access to these sometimes life-saving medical practices can come with complications. In Gender Failure, Ivan E. Coyote describes their struggles with making their desires legible to medical practitioners. This process can be complicated further when the person does not (yet) have legal status within Canada, such as refugees and displaced people.

It is important to recognize that hormonal or surgical interventions are not determinant factors to defining someone as genderqueer. Further, genderqueer people who opt to undergo medically-aided changes may not consider such procedures as "transitional," as they may not view themselves as transitioning from one position on the binary to another.

Strategies for signalling genderqueer identities may include chest binding, shaving or not shaving body hair, exhibiting a non-traditional hairstyle, bodybuilding, packing the groin region or chest to alter the body's contours, and/or wearing makeup or jewellery. Clothing choice may also signal a genderqueer identity by combining "men's" and "women's" clothing. Others make conscious choices in bodily comportment, such as gait, (not) making eye contact, and sitting with one's legs together or apart, crossed or uncrossed.

In performing gender, the appearance of the androgyne tends to privilege masculine attributes as signaling gender neutrality. Beauty, on the other hand, is typically coded as female. While "social articulation" of non-normative gender identities depend on their repetition, the variety of approaches to gender expression among genderqueer people complicates this further, queering how it is read. For an idea on some of the various ways that genderqueer and other genders may present, see Billy Star's zine, Nonbinary Pals: Portraits of Nonbinary People.