Legacy of the March

In conclusion, the We Demand march like all social movements was one step in a long history of queer activism that is still ongoing. Its significance lies in the fact that it was a catalyst for national organizing around queer rights in Canada. The legacies of this march include many legal reforms involving equal employment, the end of RCMP surveillance on civil service workers and those in the military, immigration reform etc. This moment resulted in the mobilization and creation of organizations such as The Body Politic, Pink Triangle Press, and the Coalition for Lesbian and Gay Rights in Ontario.

The work of queer liberation has since expanded, strengthened, altered, and improved upon the demands of the original march. For example, some of the original attendants of the march speak to the fact that it was largely a gathering of cis, white university-educated men and the intersections of queerness along with race, gender and class weren’t really emphasized. Although, this march was an important catalyst and the original demands have been virtually all met, the work of queer liberation is not over as there are still many fronts to continue working on. For example, HIV is still criminalized in Canada, homophobia pervades long-term care facilities, trans people are still being denied adequate healthcare, as well as many other rights. Although the government has apologized for LGBTQ surveillance in the Cold War period: surveillance, and police brutality against queer refugees, trans and 2-Spirit people, as well as queer Black and Brown people living in Canada remain to be systemic problems that urgently need to be addressed.

Acknowledgments: This digital exhibition was created with interviews from Brian Waite and Cheri Dinovo, the original We Demand signatories along with Charlie Hill and Gary Kinsman. 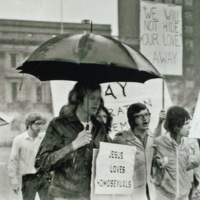 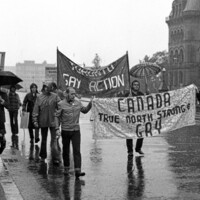 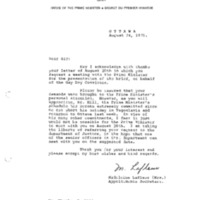 ← The Demands
Legacy of the March