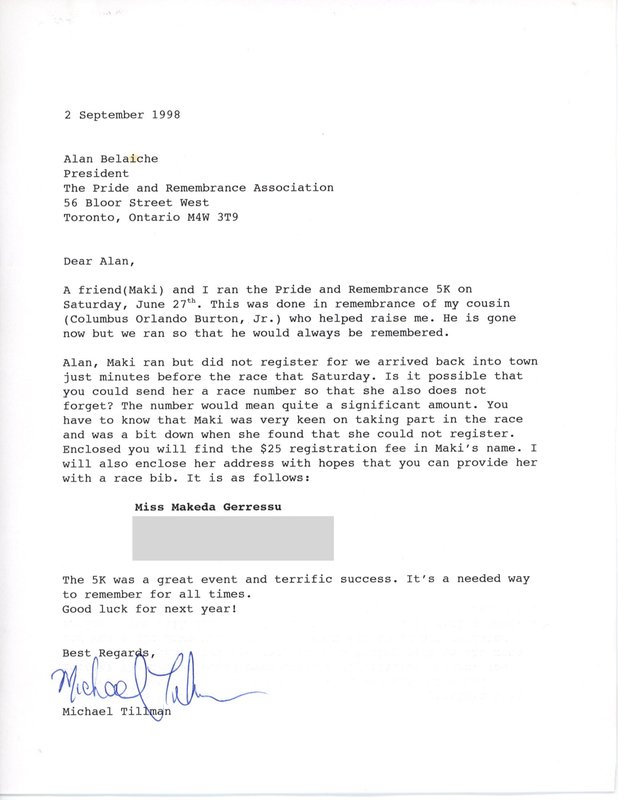 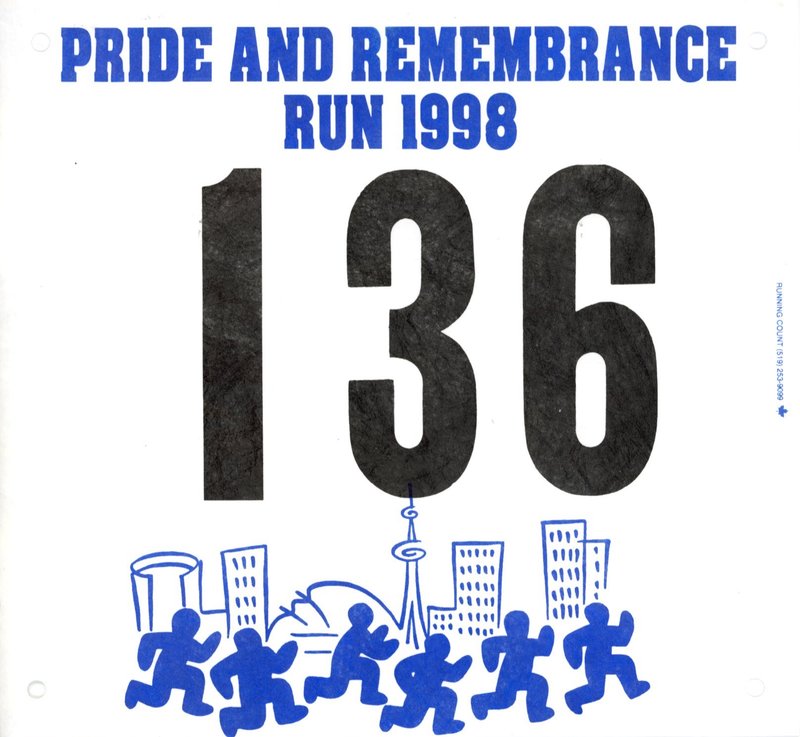 A friend (Maki) and I ran the Pride and Remembrance 5K on Saturday, June 7th. This was done in remembrance of my cousin (Columbus Orlando Burton, Jr.) who helped raise me. He is gone now but we ran so that he would always be remembered.

Alan, Maki ran but did not register for we arrived back into town just minutes before the race that Saturday. Is it possible that you could send her a race number so that she also does not forget? The number would mean quite a significant amount. You have to know that Maki was very keen on taking part in the race and was a bit down when she found that she could not register. Enclosed you will find the $25 registration fee in Maki's name. I will also enclose her address with hopes that you can provide her with a race bib. It is as follows:

The 5K was a great event and a terrific success. It's a needed way to remember for all times.

Good luck for next year!

"Of Pride and Remembrance" by Nancy Graham 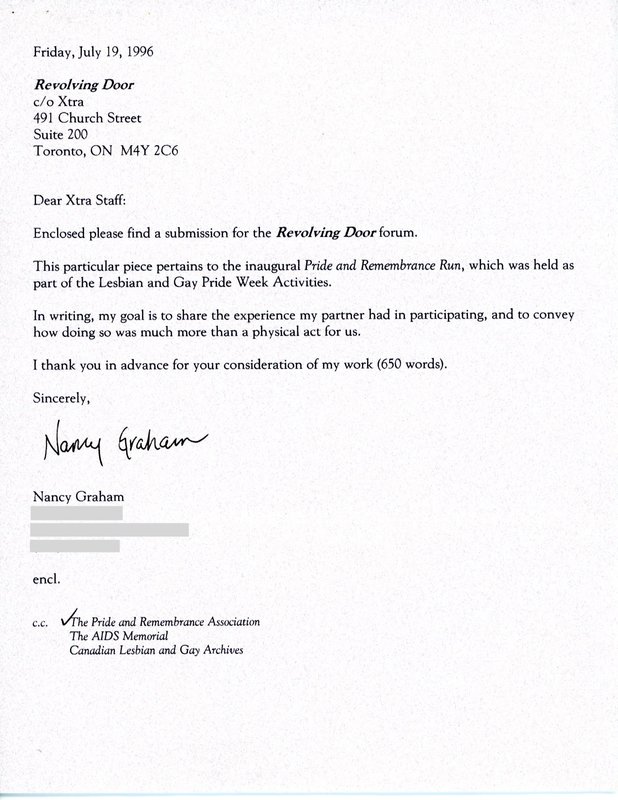 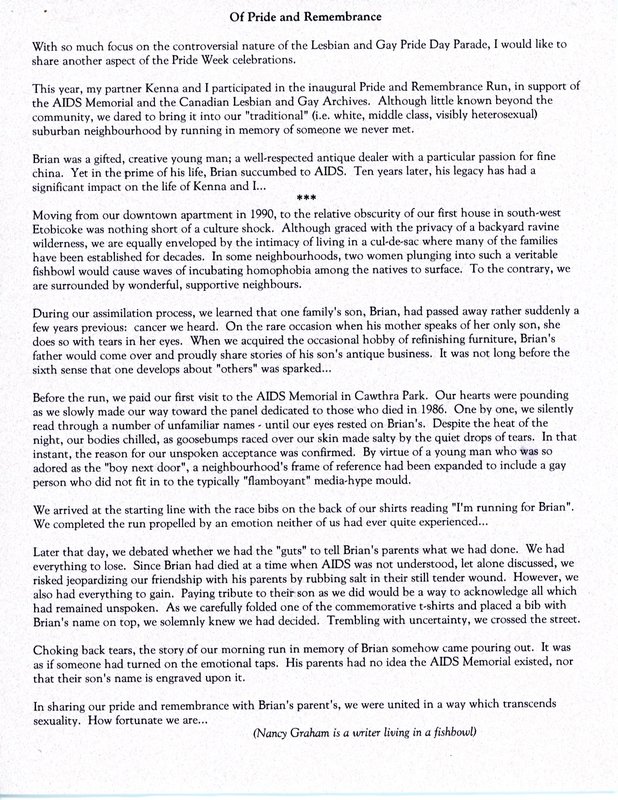 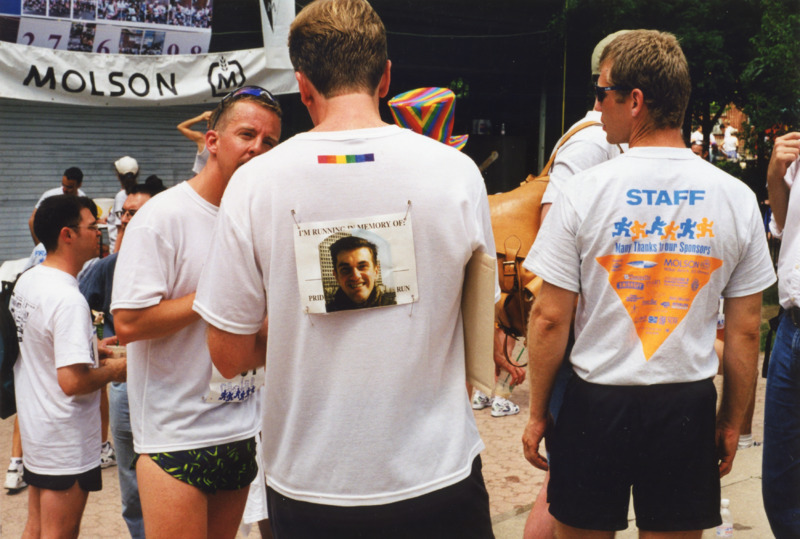 "Moving from our downtown apartment in 1990, to the relative obscurity of our first house in south-west Etobicoke was nothing short of a culture shock. Although graced with the privacy of a backyard ravine wilderness, we are equally enveloped by the intimacy of living in a cul-de-sac where many of the families have been established for decades. In some neighbourhoods, two women plunging into such a veritable fishbowl would cause waves of incubating homophobia among the natives to surface. To the contrary, we are surrounded by wonderful, supportive neighbours.

During our assimilation process, we learned that one family's son, Brian, had passed away rather suddenly a few years previous: cancer we heard. On the rare occasion when his mother speaks of her only son, she does so with tears in her eyes. When we acquired the occasional hobby of refinishing furniture, Brian's father would come over and proudly share stories of his son's antique business. It was not long before the sixth sense that one develops about "others" was sparked...

Before the [Pride and Remembrance] run, we paid our first visit to the AIDS Memorial in Cawthra Park. Our hearts were pounding as we slowly made our way toward the panel dedicated to those who died in 1986. One by one, we silently read through a number of unfamiliar names - until our eyes rested on Brian's. Despite the heat of the night, our bodies chilled, as goosebumps raced over our skin made salty by the quiet drops of tears. In that instant, the reason for our unspoken acceptance was confirmed. By virtue of a young man who was so adored as the "boy next door", a neighbourhood's frame of reference had been expanded to include a gay person who did not fit in to the typically "flamboyant" media-hype mould.

We arrived at the starting line with the race bibs on the back of our shirts reading "I'm running for Brian". We completed the run propelled by an emotion neither of us had ever quite experienced...

Later that day, we debated whether we had the "guts" to tell Brian's parents what we had done. We had everything to lose. Since Brian had died at a time when AIDS was not understood, let alone discussed, we risked jeopardizing our friendship with his parents by rubbing salt in their still tender wound. However, we also had everything to gain. Paying tribute to their son as we did would be a way to acknowledge all which had remained unspoken. As we carefully folded one of the commemorative t-shirts and placed a bib with Brian's name on top, we solemnly knew we had decided. Trembling with uncertainty, we crossed the street.

Choking back tears, the story of our morning run in memory of Brian somehow came pouring out. It was as if someone had turned on the emotional taps. His parents had no idea the AIDS Memorial existed, nor that their son's name is engraved upon it.

In sharing our pride and remembrance with Brian's parents, we were united in a way which transcends sexuality. How fortunate we are...

Photograph taken at the 1996 Pride and Remembrance Run.