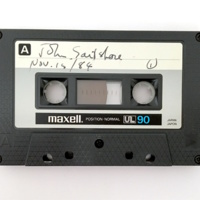 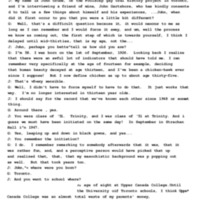 John Gartshore, a gay man age 58 at time on interview, begins the conversation outlining the his early realizations of him homosexuality at Upper Canada College. He continues onward choronologically, discussing his incomplete BA at Trinity College of University of Toronto, and involvement at St Mary Magdalene. He then explains beginning work at Air Canada (called Trans Canada Airlines at time of hiring) and then his being convinced to joi the army subsequently. Through the army, Gartshore was introduced to the Toronto gay culture – starting at Letros. Gartshore discusses his activism, through CHAT and later Courtwatch, throughout the interview, as well as his experiences consolidating his Christianity and queer identity, including his experience with the gay caucus of the Episcopal Church in Chicago and the formation of the Toronto Chapter of Integrity. Gartshore closes the interview with a brief recount of his experience with police entrapment at the bathhouse raids, and a story about his coming out at the workplace.