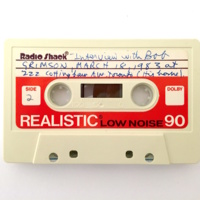 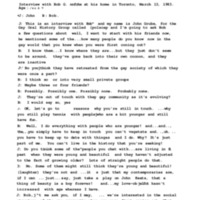 Oral history interview with a gay man, Bob, completed as part of the Foolscap project.

Bob discusses growing up Jew and gay in Toronto from pre-World War II onwards. He begins the interview by recounting his entrance into the Toronto gay scene after the war, describing this scene as mostly WASP and class-classified. He talks about the private parties held by members of this society and his frequent feeling as an outsider, being Jew and poor. Bob also explains the meaning of a “gay identity,” which he relates to a cultured homosexual man and not only to a sexual practice. The interview covers Bob’s days in the Air Force, his gay experiences with other men in service while abroad, and the gay scene in Naples. Other topics include being gay at work, Bob’s moving to California in the 1950s, his coming back to Toronto in the 60s, and his brief experience as the owner of “The Quest”: the first gay-owned gay-operated bar. He also informs about cruising practices in streets, parks, bars, theatres and steam-baths.