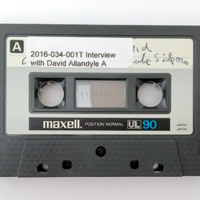 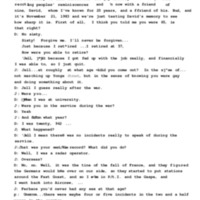 Oral history interview with a gay man, David, completed as part of the Foolscap project.

David, a 60 year old gay man at the time of the interview, discusses his long-term relationships and friendships in Toronto after World War II. He came out in the 1940s after being in service, while he studied Political Science and Economics at the University of Toronto. The interview covers David’s early life, family and friendships, being gay at work, the gay bar culture in Toronto, cruising in streets and parks in the city, occasional sexual encounters, police surveillance, his stance on psychiatric therapy, and his participation on demonstrations marching up Yonge street after the bath-house raids. David also discusses politics, defining himself as a conservative, his work experience in branch stores and in the field of interior design, as well as his rejection of the current gay culture.