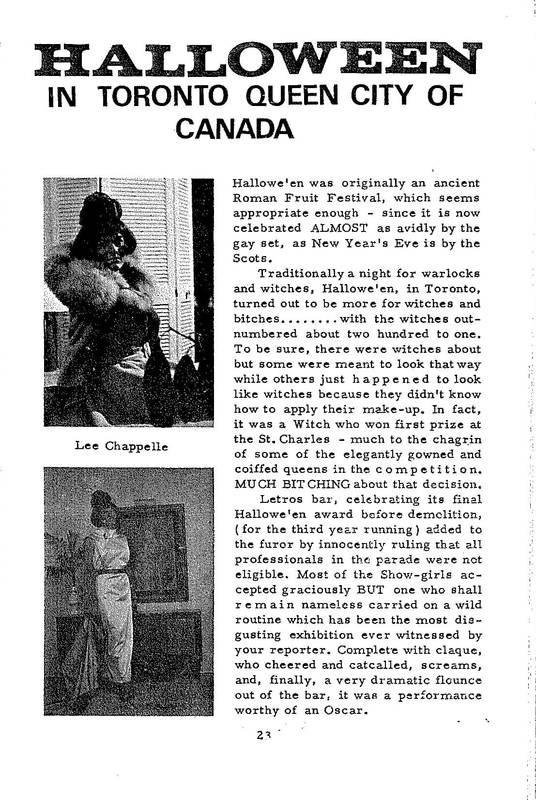 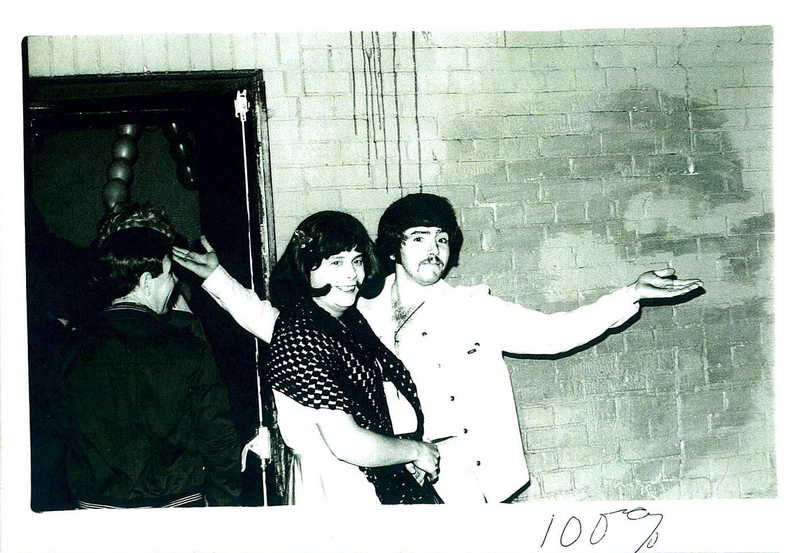 Halloween in the Toronto queer community is and always has been one of the most exciting nights of the year. As TWO Magazine, a popular gay publication based out of Toronto put it in 1965: “Hallowe’en was originally an ancient Roman Fruit festival, which seems appropriate enough – since it is now celebrated ALMOST as avidly by the gay set, as New Year’s Eve is by the Scots. (p. 23)”

One of the reasons that Halloween has made its way to being the most important gay holiday of the year, specifically in Toronto, is the direct relationship it has had to the law. Until relatively recently in Canada an individual could be arrested and harassed by police for cross-dressing. Many firsthand accounts document this injustice in the Canadian legal system, although unfortunately in my research, I was unable to locate a specific law that claims that it was illegal for a man to wear women’s clothes. It took until 2017 however,  until the Government of Canada introduced legislation to protect people’s right to express their gender as they wish, and to protect these people from discrimination, hate propaganda, and hate crimes (Government of Canada, 2017).

When crossdressing was still grounds for arrest and harassment, if law enforcement caught a man wearing women’s clothes or undergarments, it was not unusual for them to be escorted to Cherry Beach in handcuffs and to be beaten up. It was common practice for police to bring “unwanted” individuals such as, indigenous people, homeless people, and LGBT people to this area, as it was extremely isolated and inaccessible by TTC, often leaving these people in the cold without clothes to walk home (Irwin, 2007).

Halloween was the one night a year where this so called indecency was overlooked by police, giving rise to costume balls that allowed participants to publicly display their sexuality and gender (Bradburn, 2015). The two most popular venues for these drag balls in Toronto included the Letros Tavern and the St. Charles Tavern.

These balls exposed and attracted violent homophobia from many Toronto residents. This violence required police intervention, which shone a light on the rocky relationships between police and the queer community. The Gay Alliance Towards Equality played a huge part in making sure Halloween was a safe night for all queer people by actively patrolling the area and attempting to educate onlookers on homosexuality.

Halloween and its relationship to the St. Charles and Letros Taverns was a vitally important annual event that played a huge part in culturally shaping the history of gay Toronto.