A Brief History of the CGSL 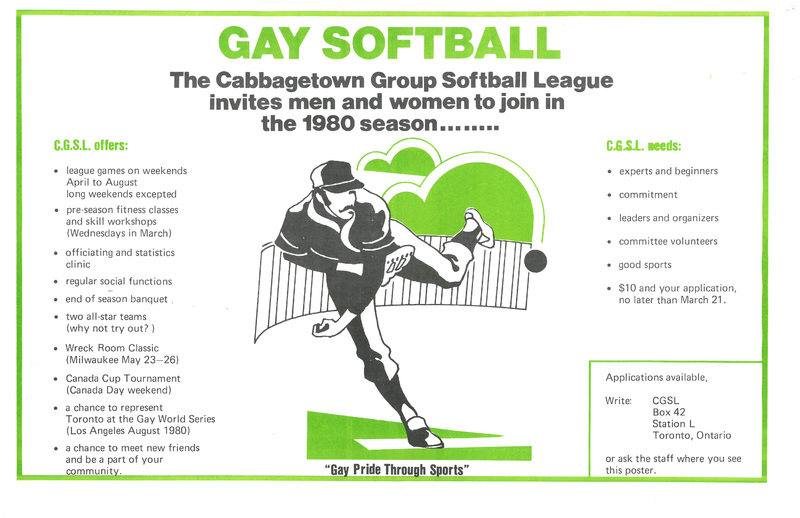 A recruiting poster that reads, “Gay Softball: The Cabbagetown Group Softball League invites men and women to join in the 1980 season...”. 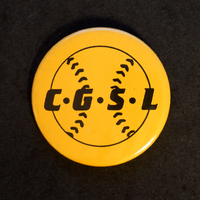 An orange button badge, 5.5 cm in diameter, featuring a baseball, on which is printed: "C.G.S.L.” (Photo by M. Pereira). 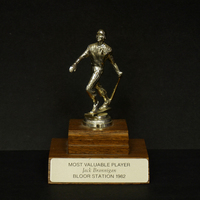 The CGSL, founded in 1977 to provide opportunities for members of the LGBTQ community to engage proudly in organized sport, became a sodality promoting gay liberation and a recreational hub. In the first year of its existence, the league was a founding member of the North American Gay Amateur Athletic Alliance (NAGAAA), under whose aegis the annual Gay Softball World Series (GSWS) was established. The CGSL began holding its annual Canada Cup tournament in 1978, hosting teams from across Canada and the USA. In 1979, the executive imparted a more structured organization on the league, publishing a constitution and a newsletter. Organization led to conflict over modus operandi, regarding whether the league should be competitive or recreational in nature. In 1980, those seeking to prioritize athleticism over participation separated from the CGSL, creating the Riverdale Softball League. In 1981, a rapprochement between the two leagues occurred, just in time for the CGSL to host the fifth annual GSWS in Toronto. Thereafter, both competitive and recreational divisions were sustained. While teams were originally mixed, in the 1990s a separate women's league was briefly instituted. In addition to holding membership drives and organizing regular season games, the executive committee organized frequent social events, including fundraising dances, award banquets and charity events, many of which were held at The 519 Community Centre.

Teams & Sponsorship →
A Brief History of the CGSL