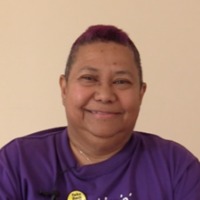 Lezlie Lee Kam is a 55+, gender-mysterious, world majority person and dyke; a Trini; a Carib; Brown; and a Callaloo-a mix of Chinese, Carib, Indian, Portuguese, and Venezuelan. She was born in Trinidad and left for Toronto in 1970. In this interview, Lezlie discusses her relationship with the police in the 1970s and 1980s; in particular, she describes being the recipient of racist police violence in 1989, as well as police violence against trans women. Discusses the presence of lesbians of colour in Pride, c. 1991-1992, with the organizations Lesbians of Colour (1991) and Proud and Visible Coalition (with Anthony Mohamad, 1992). 1993-1998: World Majority Lesbians; 1999 Queer Women of Colour. 1999, they rented a big truck to put a sign up that said 'stop police violence; stop the criminalization of people of color), but the police tried to make them take the sign down. They refused, and took the sign into the parade; as a result, the police withdrew their contact with Grand and Toy, which had underwritten the truck. She discusses trying to get funding from Pride for people of colour at 1999 Pride, and having to deal with racism on the Pride organizing committee; in response, they demanded a community meeting at the 519. Discusses how Pelau Masquerade emerged after the Proud and Visible Coalition. Discusses reaching out to Caribana Mas camp people to have connections with Pride. Describes how central Mas was to her when she was a child (her dad was a band leader, and her house was a central space for Carnival preparations).

A large section of this interview discussed alcoholism. Discusses her work with LGBTQ seniors, and how a black women at one of the sites accused her of sexual harassment, sending her into a health downward spiral. She began to drink more to cope with the stress; eventually she lost her job from drinking and went on EI. 2000-2006 drinking seriously; went through all her savings, and almost lost her house. Dec 31, 2006: brother and sister-in-law took her to the hospital. In the process of going to the hospital, she passed out and went into a coma for two months; they thought she'd be a vegetable if she ever woke up. When she woke up, she went to Bridgeport for 4 months for intensive physio and occupational therapy. The medication she went on caused her to gain 50 pounds, impacting her body image. Describes her decision to go public with her history of alcoholism and why, as well as her recovery process. Now she is involved with Women's Health and Women's Hands, a women of colour health clinic. Has become involved with the Senior Pride Network, as well as Indigenous activism.

Discusses her history of activism having to do with violence against women in the 1980s, with a focus on immigrant and refugee women of colour. This focus was controversial for the white anti-violence feminists. Lezlie eventually worked in this field for about 10 years. She describes developing a business having to with anti-violence training in same-sex contexts.

Discusses her work as a volunteer with seniors at Bridgepoint, where she often does manicures. Eventually 5 women have come out to her, but they're all closeted now that they are in care. Lezlie discusses how she's been attacked by women for using the women's restroom, because some of the residents see her as a man. She worked for over a year to get trans positive materials in the bathroom. Now she is working on Pride, and getting seniors' programming there. Describes the current politics in Pride around black activism and Black Lives Matter. Describes her experience with Desh Pardesh, where she wasn't considered Indo or South Asian enough.