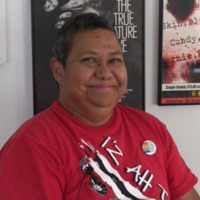 This is the first of two oral histories with Lezlie Lee Kam, a 55+, gender-mysterious, world majority person and dyke; a Trini; a Carib; Brown; and a Callaloo-a mix of Chinese, Carib, Indian, Portuguese, and Venezuelan. She was born in Trinidad and left for Toronto in 1970. In this interview, Lezlie discusses her childhood in Trinidad with her 3 brothers with her working-class father and her more well-off mom; at age 11, when she was beginning her education in a convent school, her parents separated. Lezlie stayed with her father and 3 brothers, while her mother moved to Toronto in 1968. Lezlie was involved with Mas, as was her dad, who was a band leader; she's continued to be involved with Carnaval since. When Lezlie was 16, she moved to Toronto to be with her mother in Toronto, despite not wanting to leave. Discusses her attraction to girls from a young age, while also at the same time dating boys. Two of her brothers emigrated in 1976; she describes the debates she had with her mother around her mother's expectations that she do gendered labour in the household, while her brothers did nothing.

Lezlie was only one of four non-white kids in high school in 1970: she describes racism, being called a 'monkey' by the boys, and her (humorous) response, her accent, and her efforts to modulate it once in Canada. Lezlie came out, to herself, while she was at York U 1972-1976. She discusses radical student politics at York, and the expectation that all non-whites sit at the 'black table' in solidarity with black power. She learned about Cuba, South American indigenous issues, and Caribbean literature.

Discusses her first relationship with a woman, Sonia, a mixed race Trinidadian who attended Ryerson, and the physical passion that ensued after figuring it all out for the first time; they were together for 3 years, when they were caught kissing, and Sonia's family shipped her back to Trinidad.

Lezlie describes her activism with LOOT, the Lesbian Organization of Toronto (LOOT), in the late 1970s. She worked at the coffee house, on the phones, and wanted to be a person of colour for other lesbians who looked like her. Describes her work at LOOT and encountering butch-fem roles and lesbian separatism in the contemporary scene. Race and racism was not a topic of discussion among the white LOOT activists. Discusses the transphobia she encountered at the Michigan Womyn's Musical Festival, as well as how very few other women of color were there.

Night life, late 1970s: describes the 4 women of colour in the scene, who went to The Studio, a bar where gay men and lesbians mixed. They stood out, and became disco queens; they checked out the Camu (sp?) on Trinity, near Eastern. The Camu was a working class butch-fem bar, with tuxedos and ball gowns, the whole thing; they were the only people of colour. Discusses her own sense of gender then, and more recently. She was never butch or fem herself.

This interview continues in a second interview on June 16, 2017.