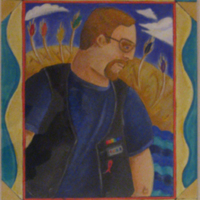 Gens Hellquist is a pioneer of gay liberation in Canada having started the first queer organization in Saskatoon in 1971. He is currently executive director of the Canadian Rainbow Health Coalition, a national non-profit addressing the health disparities faced by queer Canadians. He was the founding director of Gay & Lesbian Health Services of Saskatoon (now called the Avenue Community Centre for Gender and Sexual Diversity) and served in that capacity from 1991 to 2003. He has been involved in the formation of numerous queer community organizations in Saskatoon, Saskatchewan and Canada.

In the 1970's he was the executive director of the Gay/Lesbian Community Centre of Saskatoon, one of Canada's earliest gay/lesbian community centres addressing the range of health and rights issues facing gay, lesbian, bisexual and transgendered people.

Gens has served on the board of directors of the Canadian AIDS Society, the Saskatchewan AIDS Network and was a founding board member of the Canadian Rainbow Health Coalition. He has worked in the human service field in Saskatoon since 1971 and has served on the board of numerous local, provincial and national non-profits addressing homecare, literacy, volunteerism, HIV/AIDS, and equality issues. Currently he sits on the Saskatoon Police Advisory Committee on Diversity and the Saskatchewan Advisory Committee on HIV/AIDS.

Gens is the founder and current editor of Perceptions Newsmagazine, the Gay & Lesbian Newsmagazine of the Prairies, Canadian's longest operating gay/lesbian publication. Besides writing extensively for Perceptions he has also written for The Body Politic, Xtra, and Briarpatch and his articles have been reprinted in numerous other publications. (2005 Induction Statement)