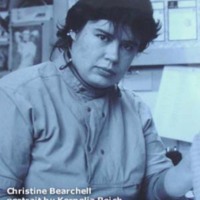 Chris Bearchell's career as a dyke dynamo covers nearly three decades. Chris began writing for Toronto's Body Politic ('BP') in 1975, often as the 'only lesbian'; she joined the governing collective in 1978 and stayed until the paper's demise in 1987. Hugely influential, and an unrelenting activist, she co-founded the Lesbian Organization of Toronto (LOOT), was key player with the Coalition for Gay Rights in Ontario, and acted as Chair of the Committee to Defend John Damien, a racing steward fired in 1975 solely for being gay.

Even after the BP's demise, her influence did not wane. She did television with the Gay Offensive Collection, den-mothered a vibrant team of news writers and wrote editorials. She worked on an AIDS project with inner-city youth and worked with Maggie's, a prostitute's rights group and drop-in. An astute analyst of pornography, she made her own - and passionately opposed censorship. She has consistently fought for the rights of queer kids, whatever their orientation. Unrelenting, loud, and infinitely proud, Chris' influence continued to be felt in Canada's queer community until her untimely death in 2007. (Induction Statement)