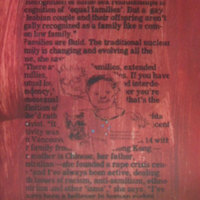 Mary-Woo Sims has worked to further lesbian and gay and same-sex spousal rights for many years. She was co-chair of the Campaign for Equal Families, and took great joy in witnessing the determination and cohesion of the lesbian and gay community during the fight for the passage of Bill 167 (Ontario legislation that would have recognized same-sex couples). She is proud to be part of an Asian lesbian and gay community that has grown enormously in visibility and strength, and is challenging stereotypes and prejudice in both the Asian and the queer communities. She is currently the Chief Commissioner of the B.C. Human Rights Commission in Vancouver, where she helped found a rape crisis centre and was awarded the Chinese Canadian National Council's Chinese Canadian Pioneer Award. (1998 Induction Statement)