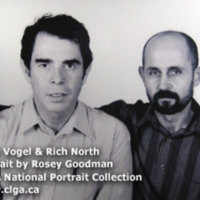 In 1972 Chris Vogel and Rich North met at the University of Manitoba and together joined Gays for Equality (GFE). They tried to become legally married in 1974, however the church ceremony was disallowed by the Manitoba courts.

In the mid-1970's Chris became treasurer of GFE, a position he has held in its successor organizations. During that time Rich worked organizing the National Gay Conference. It was at this conference that Winnipeg's first gay march and pride week took place. In the later 1970's and into the early 1990's Rich became involved in broadcasting, first with 'GaysWeek' on radio and later with 'Coming Out' on cable T.V.

In 1982, on behalf of GFE, Rich and Chris founded the Oscar Wilde Memorial Society, a restaurant and bar located within Winnipeg's gay community centre. The funds generated by this enterprise helped fund Winnipeg's gay/lesbian health clinic, Manitoba's Gay/Lesbian Legal Defence Fund and several other groups and activities. Chris became its first Treasurer and, after twenty years, continues in that position. In addition Chris founded and continues to chair Manitoba's Gay and Lesbian Archive. (2002 Induction Statement)