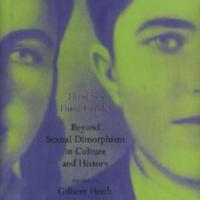 In the 1990s, questions of sex roles and individual identity have taken a central position in intellectual debates. These eleven essays in history and anthropology offer a novel perspective on these debates by questioning the place of sexual dimorphism in culture and history. They propose a new role for the study of alternative sex and gender systems in cultural science, as a means of critiquing thinking that privileges standard male/female gender distinctions and rejects the natural basis of other forms of sexuality.The essays cover a wide range of times and cultures, starting in the Byzantine Empire and moving eclectically forward, with a special focus on the seventeenth through nineteenth centuries. The anthropological studies include the Native American berdache, the Indian Hijras caste, hermaphrodites in Melanesia, third genders in Indonesia and the Balkans, and transsexuals in America.Third Sex, Third Gender emphasizes desires on the margins of society, and pleasures and bodies outside the assumed arenas of social reproduction. It opens up the possibility of understanding in new ways how, for example, Byzantine palace eunuchs and the Hijras of India met the criteria of special social roles that necessitated self-castration, and how heartfelt yet forbidden desires were expressed among seventeenth-century Dutch Sodomites, the Mollys of eighteenth-century England, and the Intermediate Sex or so-called hermaphrodite-homosexual of nineteenth-century Europe and America.